for 7 to 11 year olds performed in your school 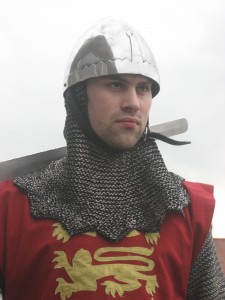 “A fantastic production. The children really enjoyed every aspect of the play and were able to retell the story in great detail”
Little Dewchurch Primary School, Herefordshire

A storyteller and four Young Shakespeare Company actors perform Shakespeare’s all-involving historical story in a fast-moving fully-costumed interactive production. The play is brought vividly to life around and among the children, at times including the whole audience to create such dramatic scenes as the coronation of King Henry V with the rousing cheer “God for Harry, England and St George!”, the preparations of the English soldiers as they get ready to set sail for France and the precisely staged Battle of Agincourt.

Throughout the performance the children become actively involved in the play through a carefully structured range of drama and language activities. They are encouraged to explore the motives, thoughts and feelings of the characters, imagining and voicing, for example, how the English soldiers feel the night before the Battle of Agincourt. Volunteers from among the children are also chosen to become individual characters in the story and all the children have the opportunity to speak and enjoy Shakespeare’s words in short, accessible sections.

“We thought it was wonderful that the children became so much a part of the show – truly memorable!”
St Luke’s Primary School, Newham

“The use of original text was in perfect proportion to the explanatory narration which made the whole story very easy to follow”
Schools co-ordinator, Ledbury Poetry Festival

“Another superb production enjoyed by staff and children alike. Lots of opportunities for the children to be involved”
Richard Bonington Primary, Nottinghamshire

Are your actors all CRB checked?
Yes.